There are now two shipwrecks off the coast of Paphos, located at Tombs of the Kings area and Sea caves. Both are tourist attractions and a sombre reminder to complacent Captains venturing too close to our shores, which have many reefs.

The shipwreck at Tombs of the Kings area ran aground during a severe storm in 1998, allegedly the Captain cited rudder problems and subsequently the MV Demetrios (2nd) breached a reef and has been stuck there ever since, there were initial attempts made to refloat the ship, all ending in failure. The ship is visible from multiple locations along the shoreline and from several hilltop locations in Paphos and the nearby villages of Chloraka, Emba, Tala and Kissonerga. The ship has been photographed repeatedly and is often seen silhouetted against the sunset. 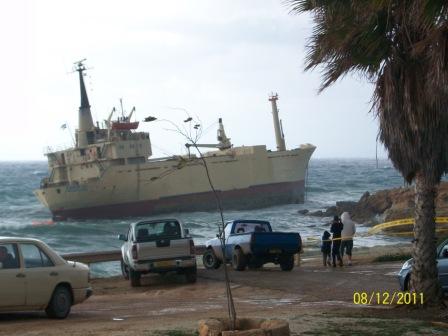 The second vessel to run aground is the Edro (3rd). This also occurred during a severe storm, albeit much later in December (9th) 2011.

The Captain and first Engineer remained aboard the ship for a few weeks, during attempted rescue operations, ultimately all attempts failed and the ship remains lodged upon rocks close to the shore (aprox 15mts).

A local restaurant has benefited tremendously from the incident and daily visitors arrive to inspect the stricken ships plight.